After a hard day’s work, I like to be, bell ringing rather than watching TV

The following is written by Jamie Singleton who is learning to ring at St Vedast Foster Lane in London as part of the Ringing Remembers campaign.

I am the Ringing Remembers Campaign Coordinator for Big Ideas, and I have been taking part in the campaign by having weekly ringing lessons at St Vedast, Foster Lane in London. St Vedast is a little-known saint (in Britain) who, according to the church’s website, is remembered for his ‘charity and patience’. These are traits shared by tower captain Tom Lawrance, who is an excellent teacher and who very kindly spends time with beginners before each Monday evening practise. The other ringers there are very friendly and I have enjoyed the biscuits and cakes that are regularly baked and offered – it means that I might have to learn to bake alongside bell ringing to be able to offer something in return. It was also lovely to meet Kate, who was learning at St Vedast via Ringing Remembers (she had seen it on BBC television) – she has written about her experience below.

I approach the tower via Bank or Moorgate station to get to practice for 6pm, battling my way upstream through huge crowds of suited City workers who are all hurriedly trying to get out of the very same area to make it home. Later on tourists prowl the streets and in nice weather I have seen that they really enjoy the sound of the bells, something not heard in many countries outside Britain, as a backdrop to their evening alfresco coffees and beers. St Paul’s Cathedral looms large and almost unreal in the background and glass and grey buildings stretch up into the sky.

To gain entry into the bell tower, ringers receive a key that is parachuted out of the window or pulleyed down via basket in the event of bad weather, which is just the beginning of the beguiling bell ringing experience. The church has a history that dates back to 1170, which includes a rebuild by Christopher Wren following the Fire of London and a major restoration after being firebombed in the Blitz. This sense of history permeates the building and is reinforced by the 300-year-old graffiti that is found in the bell tower. Contemporary bell ringers and visitors have added their own creative graffiti to the walls in recent times in the form of triolets, which are 8-line poems in the rhyming scheme ABaAabAB. 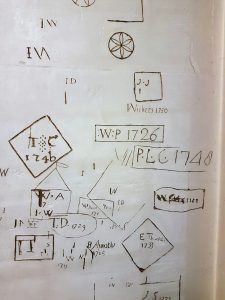 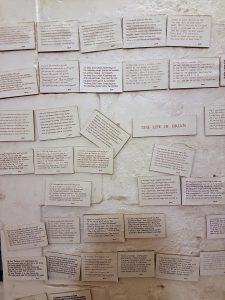 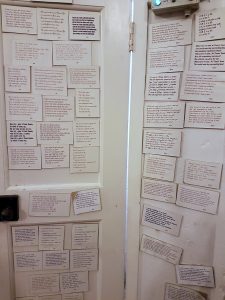 Tom has used multiple computers, word processors and operating systems past and present, alongside internet resources, to guarantee that no two triolets are printed in the same font. He is currently sprucing these up by reprinting and rehanging them and, beyond the length of time it is taking to do this for hundreds of triolets, he is conscious of the challenge he may eventually have in tracking down obsolete fonts! I look forward to adding my own triolet – it is said that creativity happens in places beginning with the letter B, including the bath, bed, and at breakfast, and I can now add bell tower to the list. These make the tower a welcoming place and ringers can read them to cheer themselves up following any misfiring attempts at a method or, in my case, ringing a bell. 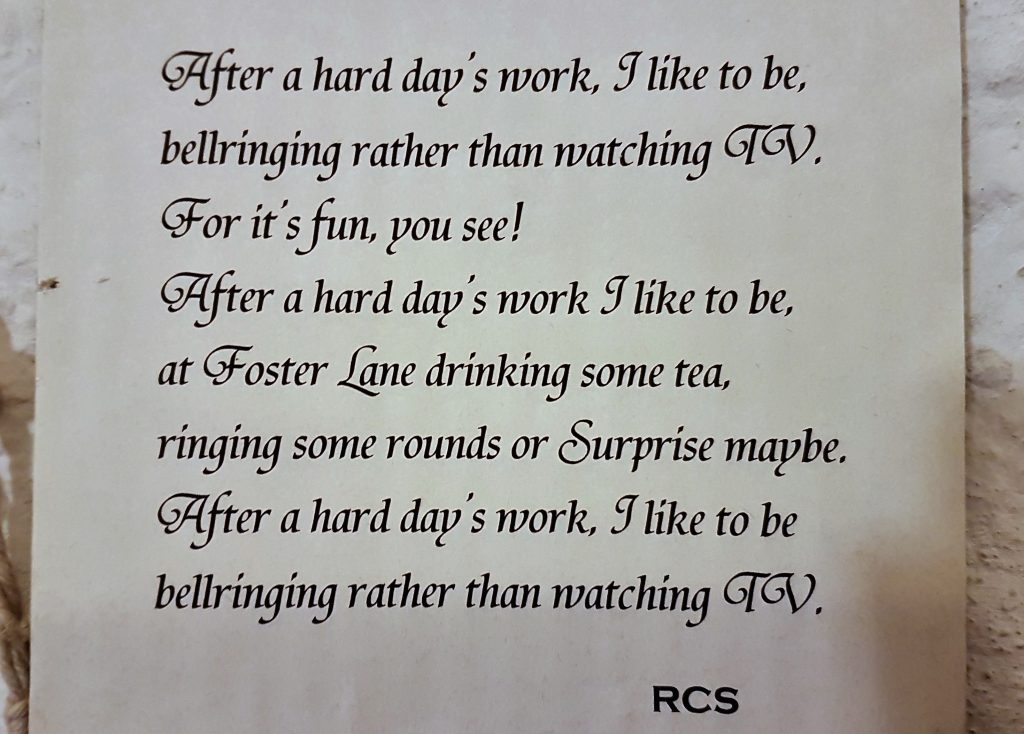 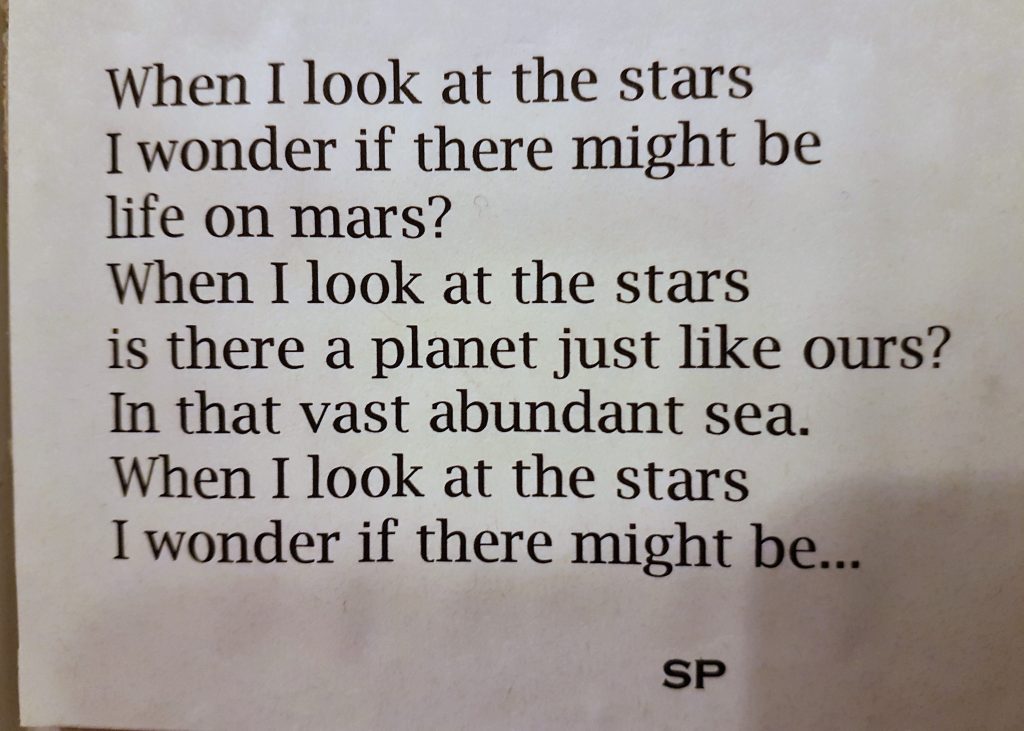 After six weeks I have managed to ring in rounds with other ringers, but my main ambition at this time still to be in full control of the bell. I have really enjoyed this process of ‘getting a feel’ for it. I am using the part of brain and muscle memory that learns and becomes better at something through practice, a feeling that I have not had (to this level) perhaps since school – it is a wonderful and addictive feeling. I am looking forward to this becoming second nature so that I can focus on the ringing patterns and methods.

As someone who comes from a line of Londoners I feel a sense of connection to learning in a London tower. I also recently discovered, through my granddad, that my two great grandfathers fought in WW1 – my granddad’s father and father-in-law. He didn’t know much of their war experience as apparently they did not speak of it and also (like St Vedast) the London office that contained their war records was bombed in WW2.

My granddad’s father became a Corporal, something he was immensely proud of according to my granddad who remembers seeing a photo of him standing half turned toward the camera so that the stripes were unmistakable. My great grandmother was a Lady’s Maid and first met my great grandfather on a compassionate visit to the hospital where he was recuperating after being shot in the leg. After this first meeting their relationship was conducted for several years via the post and, 100 years later, here I am writing an entry about them for an online blog. Before the war he had delivered paraffin used for cooking on a horse and cart and after the war he drove busses, vans and lorries – driving a skill he must have picked up during the war somehow.

My other great grandfather lied about his age and enlisted when he was only 15 at the outbreak of the war, apparently his mum wrote to someone in the army to ask if he could be withdrawn from the front line because of his age. Whilst he was not sent home, this wish was fulfilled at first (as far as we know) and he would survive the duration of the war.

I am motivated to ring on Armistice Day in remembrance of them and others who came from across the world and who went to war in all variety of roles and capacities, as well as for the 1,400 bell ringers and indeed for all the men and women, many younger than me, who died in the war often in conditions I can barely begin to comprehend or who were traumatised by the war’s lasting impact. Occasionally, when researching for the campaign the thousands of names of those who fell that we have recorded for our projects, I am overcome with sadness as the sheer tragedy of the loss of life again becomes apparent to me through their stories. I think the campaign is a wonderful, if only small, way to honour their memory.

I first heard about the campaign on the London News, a call for those interested in learning to ring, especially in central London. I thought it was a great idea, the centenary of the end of WW1 very important to commemorate and something I wanted to get involved in. My first experience of a ringing loft was during the snows of March. The bells rang out as central London fell silent – they are a committed group of people. Accessing the loft in St Vedast through the main body of the church I have skirted a cappella groups, small choirs and I am told it will be a yoga class next week, all communities bringing life to the building. It was an emotional experience the first time I heard my bell ring, maybe not in time or in sequence, but encouraged by Tom and the other ringers. Some way down the line I will have to learn the intricacies of the ringer’s code and master that elusive chap, Bob.

The Ringing Remembers campaign is recruiting 1,400 new bell ringers in memory of the 1,400 who lost their lives in World War One. All new recruits will have once in a life time opportunity to ring on Armistice Day (11 November) this year to mark 100 years since the end of the war. Find out more about the campaign and signup by clicking here.